The story about Vietnam Longan fruit

Once upon a time, there was a robber, robbed a lot of, took a lot of houses, but still not satisfied. He didn't just want to be rich, he wanted to be the king. The evil raven told him: "To be king is not difficult, just need a Dragon eye attached to your eye ...". With a head full of greed, the robber decided to find that Dragon eye and promised to reward the raven with a lot of treasure if it could help him.

In the upstream area, there is a poor child who often goes to the river to get water for her mother. One day the boy suddenly picked up a big egg on the shore. It was a Dragon egg but he did not know, so he brought the egg home. A few days later, the eggs hatched. A dragon came out. The boy panicked. The dragon immediately told him:
- I'm not a snake, I'm a dragon. You let me live with you. I will help everyone.

Luckily, the boy’s mother agreed to adopt the dragon as a child. Everyday, the little dragon work hard to practise spraying water so that when the dry season came, he could help to water all plants in the village. Day by day, practising until the sunset, the dragon flew up to the mountain peek to find a cloud to sleep. Early in the morning, he flew back to his mother and brother. One day the boy and the little Dragon were bathing, the evil raven accidentally saw them and happily announced right away the news to the greedy robber. They secretly planned to take one eye of the poor little dragon.

At the middle of the night, the dragon who was sleeping soundly on a white cloud halfway up the mountain suddenly felt a sharp pain in one eye. The Raven had used some of its sharp claws, catching the dragon's right eye, then dropping the shining dragon eye down to the robber.

Our little dragon roared in pain so loudly that woke up the boy. They went straight to the forest to look for the eye and found the robber hiding in a huge bush. When fighting to take back the eye, the battle was very tense that the boy use an arrow to defeat the robber. The greedy man lost, but when he fell down, the dragon eye in his hand dropped to the sand and ruined. When one eye was destroyed, another would soon be in no use. The little dragon was so unlucky, isn’t him?

Because the dragon felt grateful for the family that had adopted him, so he did not show any sorrow and tried to fly without seeing anything. There were many times the dragon hit the trees, and rocks painfully so a warm-hearted fairy told the boy a way to help the dragon have the bright sight again. After that, he hurriedly ran home and asked the mother to roll the broken eye of the poor dragon on a soft layer of brown soil. The mother loves Dragon very much, trying to roll gently. After rolling, she carefully buried under the ground. Ten days in a row, the mother asked for milk from the neighborhood for irrigation, every morning for ten drops. Ten days later, she used honey, every morning, exactly ten drops. Miracuously, from the land, a sprouts of trees started to grow up.

Twelve months pass by, the tree had fruits. As the fruit grows, it looks very much like the eyes of a dragon when it has rolled on fine brown soil. One night in late June, the boy looked and saw in thousands, thousands of them, there were two glowing fruits. He picked them up, peeled it off, and sticked into the broken eyes of our little dragon. The dragon had the same bright and beautiful eyes as before. He was so happy that he bursted into tears. The tears of the Dragon were really clear, like the dewdrops in the middle of the mountain. 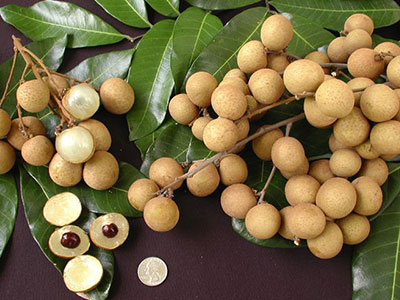 That fruit is the Dragon eye fruit which is “Long Nhãn” in Vietnamese. Until today, people often call it “Longan” in English as an international pronunciation of the fruit.

If you have not tried longan, come to Vietnam and give it a try. With the taste of sweet integrating with fragrant fruity smell, you cannot resist to have one more, one more… and one more…