The story about Vietnam Watermelon

Once upon a time, King Hung adopted a son named Mai An Tiem. He was very smart, and the King really loved him. One day, during a royal banquet, the King ordered a servant to give Mai An Tiem delicious food. However, Mai An Tiem refused it and told the servant, “What is given is actually a debt”. The next morning, the King asked about what Mai An Tiem said at the banquet. Mai An Tiem said, “Your Majesty, the only things that really matter are those we can do on our own”. King Hung was very angry so sent Mai An Tiem to a deserted island because he thought that his son was not grateful for what he received from the King. As soon as Mai An Tiem’s wife heard about the punishment, she started to cry. “Don’t worry. We can live on our own. Someday, we will be able to return to the mainland”, Mai An Tiem said. The couple packed clothes and food for their journey.
When they reached the island, Mai An Tiem turned a cave into their house. He felt sorry for his wife, but he believed that they could find a way to live happily there. The next day, while Mai An Tiem and his wife were fishing along the shore, they saw a flock of birds eating a strange fruit. Mai An Tiem walked closer. He saw the birds had left behind black seeds and took them home to plant.The couple happily watched the seeds sprout. They took care of the plants every day. Their garden gave them hope for the future. One day, they saw a flock of birds come and eat the green unripe fruit from their garden. They did not chase them away. After the birds flew away, the couple picked up all the seeds that were left. Mai An Tiem believed that the fruits which were chosen by the birds was always the best fruit. A few months later, the fruit was ripe. Mai An Tiem cut a fruit and found it very juicy and sweet. One day, he decided to carve his name into a fruit rind and throw it into the sea. He hoped someone would catch the fruit.
Year after year, Mai An Tiem carved his name on the fruit rind and threw it into the sea. His wife told him to stop, but he kept doing it. He didn’t want to live on the island forever.
One day, a fishing boat came near the island. When they pulled up their net, they found a fruit with ‘Mai An Tiem’ carved on it. The fishermen came to the shore and found Mai An Tiem growing this wonderful fruit. After that, Mai An Tiem traded the fruit for rice and salt from the fishermen. Some Chinese traders tried watermelon and was surprised by it flavors. They unconsciously said: “How-ah” (means delicious in Chinese) so Mai An Tiem named the fruit “Dua Hau” (Dua means melon).
When they arrived on the mainland, the fishermen took the fruit to the village market. All the villagers loved the fruit. Word spread about the new tasty fruit from the island. King Hung also tasted the fruit and found it delicious. He wondered who had planted it. King Hung was shocked to hear that his son was still alive and grew the fruit. He was ashamed that he had sent Mai An Tiem to the island. The King decided to bring the couple back to the mainland. Mai An Tiem picked all the ripe fruit to bring back with him. He also brought seeds to the mainland. He wanted to share the fruit with everyone, and teach them how to grow it.
You may not know yet:

- Watermelon with green and red flesh will bring good luck. The succulent, round fruit, sweet and sweet, symbolizes prosperity and fullness of life. The red watermelon is also chosen a lot to decorate on Lunar new year because of its lucky color. 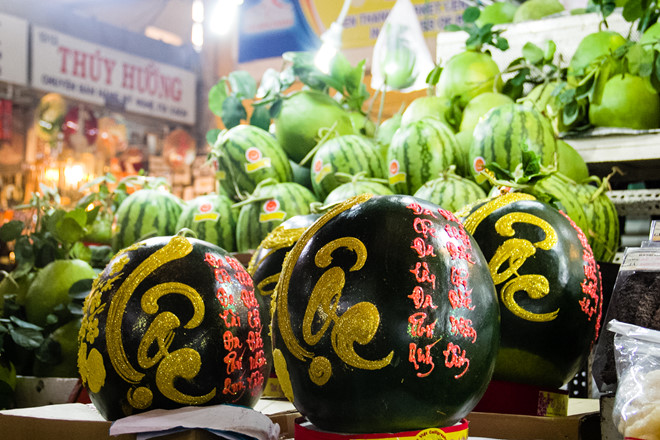 - Besides the red watermelon, we also produce another kind of yellow watermelon. But both red and yellow colors are the lucky symbol in Vietnam culture. 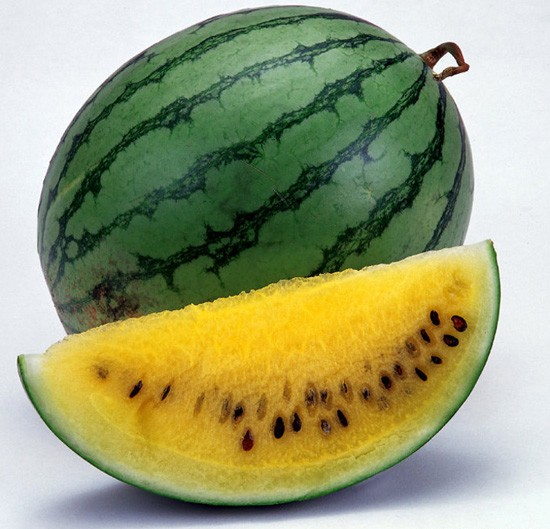 You may find it interesting to read the story about longan fruit.