What's the difference between Mi Quang and Cao Lau?

In fact, Mi Quang and Cao Lau are two totally different dishes and in order to help you remember the name and the flavour of each dish easily, the Tiger will give you some small tips to tell them apart.
1. Location:
- Although both Mi Quang and Cao Lau are typical for the Central’s cuisine but Mi Quang is more well-known in Da Nang, while Cao Lau is the most recommended dish in Hoi An (30km far from Da Nang)
2. Noodle’s type:
- It’s true to call Viet Nam by the name “The country of noodles”, we have numerous delicious noodles dishes in the entire country, including Mi Quang and Cao Lau. In the “noodles family”, Mi Quang has wide, solf and dark yellow noodles, while its brother Cao Lau uses the thin, hard and pale yellow noodles. Besides, you can easily recognize the noodles used for Cao Lau is usually shorter than the ones in Mi Quang.
- Both two kinds of noodles used to make Cao Lau and Mi Quang are made of rice flour, but it’s more complicated to make noodles for Cao Lau since they have to soak rice in special ash water from Cham Island (in Hoi An) before making noodles.
3. The ingredients:
- Alongside yellow noodles, you can find in a bowl of Mi Quang pork meat, chicken meat, shirmps and chicken egg or quail egg. They also have other versions of Mi Quang with frog meat, duck meat,… Additionally, Mi Quang is usually served with Bánh đa nướng (grilled rice paper with sesame), plentiful fresh herbs and roasted peanuts on top. 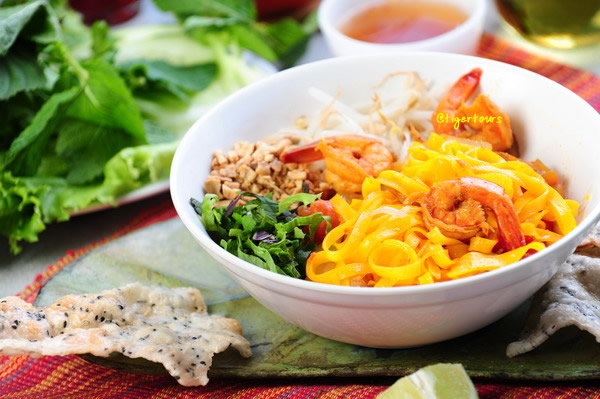 - Not as adaptable as Mi Quang, Cao Lau stays loyal to thịt heo xá xíu (pork meat fried then stewed with special sauce) as the main ingredient to enhance its flavor. Cao Lau is commonly served with small crispy wafers made of rice flour, bean sprout and herbs. 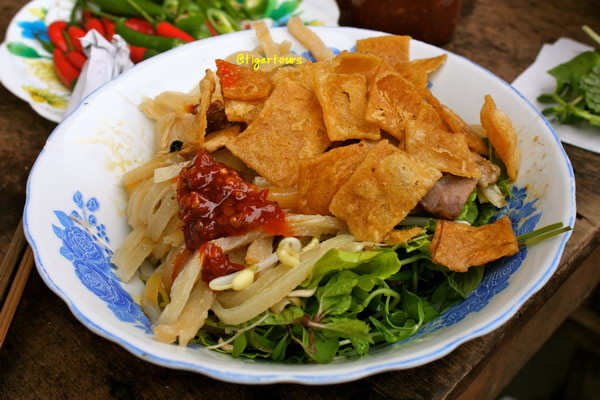 4. Broth:
- Unlike other noodles dishes in Viet Nam with much broth, both Mi Quang and Cao Lau have very little broth in each dish and there are differences between them. The broth used in Mi Quang is clear, savoury and has the flavor of chicken or pork (or whatever kind of meat they used to cook). On the other hand, Cao Lau has the thick and dark broth taken from the sauce they make thịt heo xá xíu, which is salty and soy-ish.

Vietnam is an incredible destination for street food lovers and just make sure to eat these two traditional noodles in Hoi An while you in Vietnam. More best dishes MUST-TRY in Vietnam